Eddie Keith was driving past home after home shredded by the tornado when he noticed two children standing in a field off Mount Vernon Road in North Hall.

A few adults were picking up debris some distance behind them.

Keith stopped, approached one of the children, a young girl, and asked her, “Where’s your home?”

She spread her hands and shook her head.

Turns out, “her mobile home had been completely blown away,” Keith said. “I don’t know how these kids survived. God was sure looking over them that day in 1998.”The brief encounter was just one of many scenes still vivid in Keith’s head from that dreadful day 20 years ago, when a tornado before dawn roared through North Hall and part of south White County, killing 11 people in Hall and two in White and injuring more than a hundred.

“It’s just a sad thing,” said Keith, an American Red Cross volunteer who worked in communications and damage assessment after the storm. “I almost choke up now talking about it.”

March 20, 1998, is frozen in time for many residents, every grim detail still in place like it happened yesterday. They remember being awakened violently or getting ready for work, then racing to find shelter upon hearing the classic “freight train” sounds outside their windows.

With the anniversary approaching, several residents and emergency responders from that day talked with The Times about their ordeals.

For former Hall County Fire Services Chief Mike Satterfield, the reality of the storm’s impact didn’t really hit until a firefighter came up from behind him at North Hall High School and said, “Chief, what do you want me to do with this child?”

“I’m thinking it’s maybe a child somebody has dropped off … and the firefighter’s just trying to make sure he’s safe,” Satterfield said. “I said, ‘The principal is there in the office. Just (take) the child there.’”

The firefighter said, “No, no, chief. You need to look.”

“I turned around and he had a stretcher with a sheet over (a body),” said Satterfield, now retired and living in Newton County. “(Up to that point), I was thinking structural damage, tree damage, roofs gone, those kinds of things. None of us were aware of fatalities.

“That’s when we knew that the storm was much stronger than normal. We had worked several tornadoes over the years. This one was (different).”

The tornado first touched down at 6:27 a.m. on Leach Road north of Chestatee Road, knocked down about 100 trees before proceeding to zigzag its way through North Hall, according to a map published at the time by The Times.

The first person killed was Bobbie Sue Hoenie, a part-time Hall County 911 dispatcher, who had stopped to help a motorist in the storm.

At 6:30, the tornado destroyed the front wing of Lanier Elementary School off Thompson Bridge Road in Murrayville. A truck driver, Ronald Underwood, was killed while making a delivery at the school.

Just 2 minutes later, the storm was attacking North Hall High off Mount Vernon Road, taking the roof off the vocational wing and killing the custodian, Calvin Little Jr., who lived near the school, his daughter, Tonja Simerly, and her 6-year-old son, Austin Simerly.

Two other nearby residents, Ray Foster Jr. and Danny Barham, were killed when their trailers were destroyed.

Joseph Boring and his grandson, Matthew Boring, were killed in their home off Shoal Creek Road before the storm entered White County at 6:45 a.m. and killed two more people, Hayley Wilson and Jesse McLendon.

Dover remembered waking up that morning and looking out the window at his house.

The lightning flashed “as if someone was welding,” he said. “It was so bright you could see the cattle in (a nearby) pasture. Just as I stepped across the hall to wake up our son, I heard a dull sound, like an old-fashioned siren.”

Dover’s son was already out of bed. Father and son met in the hallway, “and we bowed down in the kitchen and started praying. We knew (the storm) was coming in fast.”

About 10-15 seconds later, “we could hear trees hitting the ground, and then it left just as sudden as it came,” Dover said. “Then, it was so quiet, and it started getting light.”

Kevin Towe, a Lawson Road neighbor, got home early that morning from finishing a shift at the Wrigley plant in South Hall. He woke up as the storm hit the area and began checking on family living nearby.

“My grandpa was out staggering around his yard with his head bleeding … in a daze,” Towe said.

An uncle survived, but his trailer was destroyed. A cousin’s house took a strong hit, with one of her two daughters missing for a while.

“She claims she was able to hold one of them by the hair of the head and hold onto her while everything was being destroyed around her,” Towe said.

The other daughter eventually was found under a piece of metal in the yard.

Clermont resident Kim Cantrell was getting ready for work when her son, about 18 months old, woke up “just screaming.”

“I got him out of his crib and could not console him,” she said. “About that time, the lights flickered and then my (4-year-old) daughter woke up crying. That’s when we gathered all together and that’s when I heard that sound that everybody says you hear — a train.

“The lights went out and I told my husband, ‘We better get in the bathroom.’”

They ended up huddling in the bathroom.

“Shortly after that, I said, ‘There goes the roof,’” Cantrell said. “We were praying. It seemed like forever, but I know it was a very short time and it was over.”

Neighbors near her Double M Drive home were outside calling for the family.

“They thought we were surely all dead because our house was totally destroyed — except for the bathroom,” Cantrell said. “We were in God’s hands. He protected us. We were not hurt at all, which was a miracle.”

Carol Ann Habermann was working in medical records at the old Lanier Park Hospital off White Sulphur Road when the storm struck.

“I had gotten to work early because the staff of the entire hospital was going to have a meeting with the CEO,” she said. “As many of the staff was waiting for the meeting to start, we made a comment about how eerie the sky looked. The sky was a shade of green.”

The emergency room announced a “code black,” which means “pretty much all hands on deck,” Habermann said.

“I remember people coming in from every possible entrance,” she said.

Habermann said she particularly remembered one person bringing in a neighbor who had been “placed on a door found in a field and put into the back of a pickup truck.”

Emergency workers and others have frequently described the scenes around North Hall — debris scattered on hillsides or being thrown into piles to burn — as “war zones.”

“That’s what it looked like,” said Hall County Sheriff Gerald Couch, an investigator at the time. “Everything was destroyed. The trees were gone. (We were) just trying to find a house number, because mailboxes were gone.”

Couch had the bleak task of “doing house-to-house searches, looking for victims.”

But as dark as those moments got, “it was really good seeing neighbors come together,” he said. “I remember seeing men pull up in pickup trucks and everybody had a chain saw. They were getting out and helping their neighbors, cutting trees off houses.”

The tragedy hit home for Marty Nix, a sheriff’s lieutenant and Clermont resident at the time and now assistant county administrator, “because I personally knew several of the injured and dead.”

Former Hall sheriff Steve Cronic at the time lived in Murrayville, just a few miles from Lanier Elementary. On the way to his office in Atlanta, he heard news about the storm on his car radio and turned around and rushed home to check on family.

“After making contact with my family and learning that they were OK, I began hearing more about the terrible damage and loss of life,” he said. “I then contacted my superiors, explained the situation and told them I would be out of the office for the next week or so.“For the better part of the next week I volunteered through my church, Lakewood Baptist, working daily to deliver water and food to the public safety workers, other volunteers and, of course, the victims of the storm.”

The storm remains a painful memory for family and friends who lost loved ones.

“Every once in a while, I think about it, miss him and would like to talk to him,” Jeff Underwood said of his father, Ronald. “But the Lord has a purpose for everything.”

“When I found out about (their deaths), I was just broke,” she said.

And seeing their coffins lined up in the funeral home was “unbearable.”

The community’s reaction after the storm was a bright spot in the whole ordeal.

“The county came back, as always, and reluctant to give up,” said Satterfield, a North Hall native. “Hall County’s a great place with great people. They took care of each other to get through it.”

Towe, who these days oversees the grounds upkeep at Alta Vista Cemetery in Gainesville, said the response by area residents “was a good thing to see, because I was just recently out of high school.”

“To see everybody coming together and helping each other had a real big impression on me,” he said. “It was a traumatic experience, but to see the positive come out of it was really neat.” 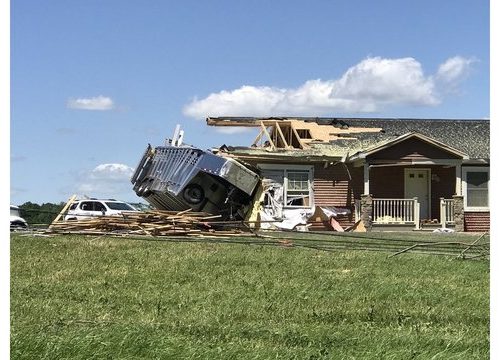