Another damaging storm has hit Franklin County, seven years after the tornado that ripped through parts of the county in 2011. March 19 will go down in history as another moment when buildings and land were destroyed and panic spread. But according to Russellville Fire Chief Joe Mansell, it will also be remembered as a day when the county bonded together, faced a crisis and came out on the other side with the reassurance that the proper actions were taken.

“Prayers were answered … It could have been a lot worse,” Mansell said.

It was around 4:48 p.m. when the first rotation was spotted in Franklin County, according to EMA Director Jody Hitt. Mansell said he spotted rotation as it began and got caught in the middle of the storm going north on Highway 24.

“I was trying to get to a high point to see what direction the storm was going to take, but I didn’t even get over the hill near the Franklin County Animal Clinic before it caught up with me,” Mansell said.

After several minutes of being pushed around by the storm and almost being forced off the road, Mansell found relief as the storm continued along its path.

“I’ve never been in a situation like that in my 26 years on the job, and I hope I never have to be again,” Mansell said.

The National Weather Service in Huntsville surveyed the damage Tuesday, and as of 1 p.m., NWS officials were still determining the paths and severity of the storm.

“There was one definite track west of Russellville, and we’re looking at the one that went through Russellville now,” NWS’ Chelly Amin said.

While they are still putting together the pieces, NWS authorities said they believe they found the starting point, which was west/northwest of Russellville. It has tentatively been rated an EF-1 tornado with 100 miles per hour or stronger winds. Amin said so far, the largest width of circulation has been measured at 75 yards.

Some of the most noticeable damage occurred on Highway 43 near the Highway 24 overpass. According to Hitt, Waffle House was in operation when one of the business’ front windows was sucked out, the sign was blown out and the air units on the roof were damaged. Alabama Central Credit Union’s awning and roof were damaged, and Road Gear Trucking Equipment received severe damage to the building.

Hitt said some of the other locations that received damage were the Lee Complex, Filmore Street, apartments on the east side of Russellville behind Road Gear and Walmart.

Ashley Cox from the Burnout community watched the storm roll in from her front porch. She said it “seemed to have been traveling up Highway 247. It had a green tint to it and foul smell and what sounded like continuous thunder.”

Cody Taylor said his neighborhood, the Deer Run Subdivision, sustained a lot of damage, including many felled trees like the ones that hit his house.

“Today was a big reality check. I really thought today was it for us,” Taylor said. “Obviously God’s not done with us yet, and I’m thankful for that.”

13 tornadoes now confirmed to have touched down Memorial Day 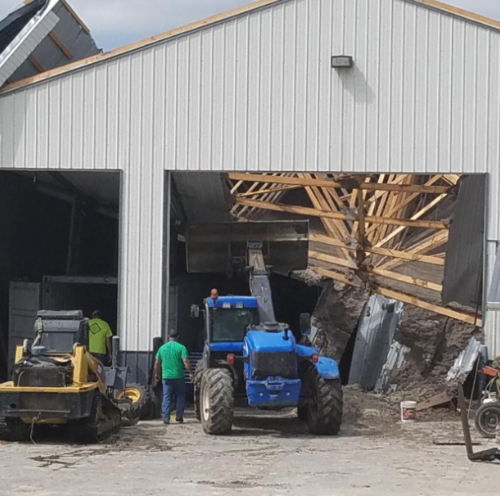