No one wanted the visitor to Purcell that dropped in uninvited on the night of May 2.

A severe thunderstorm packing strong, possibly tornadic, winds hop scotched across the city, knocking out electricity in the north part of town and felling one of the new light poles installed as part of GreenScape about 9 p.m.

“Probably the biggest damage was on North Canadian east of the football stadium,” Bunn said. “Some outbuildings were blown away.”

City workers were out assessing the damage and beginning the cleanup until after midnight, Bunn added.

About 10 firefighters and volunteers were joined by the street, water and electric departments.

The electric department still had personnel out at 10:45 a.m. the next day.

Bunn said most of the electricity was back on just after midnight. But there still could be individual outages that “we didn’t know about.”

Parts of town were without power for up to 6 1/2 hours.

The Parks and Recreation Department worked on storm damage around the lake and especially on Red Hill.

Bunn said he believes it was a tornado that caused the damage, but deferred that confirmation to emergency management director Kevin Rhoads.

After touring the city to assess damage with mayor Ted Cox and vice mayor Danny Jacobs, Rhoads sized the tornado as an EF-1, which he clarified is a small tornado.

“I think it stayed in the treetops most of the time until it got to Red Hill and crossed the river,” he said. “It was on the ground then.”

With reports that some residents never heard the storm sirens and others only heard the warning faintly, Rhoads said there was no problem with the sirens’ performance.

“The sirens are for people outside. They aren’t made to penetrate buildings,” he explained.

Residents need to remember that when winds reach 45 or 50 mph, they “just blow the sound away.”

“If that wind’s moving, you’re not going to hear (the sirens). That’s just the way they are,” he continued. “The city has one of the most up-to-date systems there is.”

Among damages caused by either the tornado or straight winds about 2:30 a.m. was a tree falling on vehicles on Bruel. The Rotary ticket booth at Conger Field was blown onto its side and moved northeast about 75’ by the winds.

The Welcome to Conger Field Go Dragons sign was blown out of the ground and onto its back.

There was tree damage all over town and the garage roof was destroyed at Maria Pritchett’s house at 301 W. Harrison. Her garage ceiling also fell in.

She was in the garage when it started shaking.

“I had no warning,” Mrs. Pritchett said. “I didn’t know what was going on.

“I ran to the front of the house and then outside,” she said.

McClain County Sheriff Don Hewett said he was watching Channel 9 and only knew there was a tornado when his cell phone alerted him.

A front porch on a home nearby the Hewett’s was blown on top of the neighbor’s house.

When the strong straight line winds blew through the area about 2:30 a.m. it blew the porch back to its original position.

The small tornado touched down in the area of the Green Avenue Church of Christ, church officials said. It destroyed a storage shed behind the meeting house without damaging or disturbing the contents.

The storm also left a large dent on the south side of the building from flying debris and caused minor water damage inside.

Rhoads said in this instance, he only had about a minute in which to sound the sirens from the time the warning was issued until the tornado was moving through the city.

Instead of relying solely on tornado sirens, Rhoads said residents should affix digital antennas to television sets or invest in a weather radio.

“Something to ensure they will receive that warning,” he said. 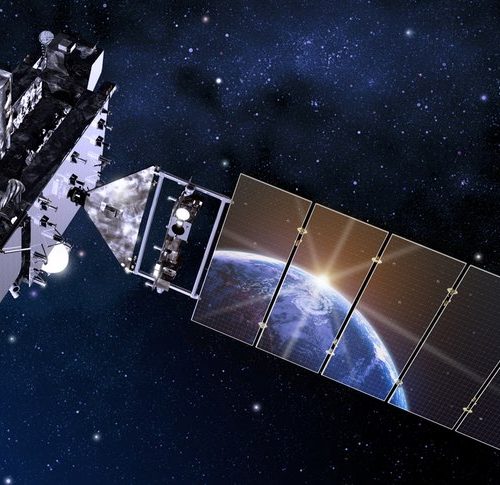 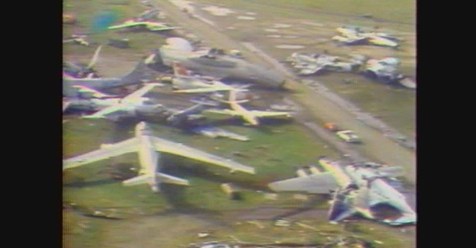 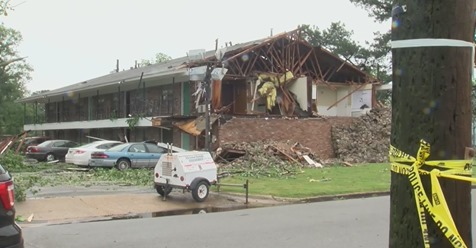 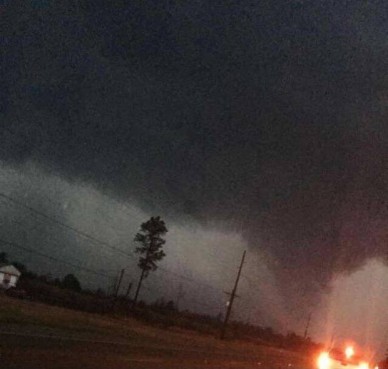