Since 1950, more than 300 tornadoes have been reported in the Kansas City metro area, but none of them compare to what happened on the evening of May 20, 1957.

And 64 years later, it’s still utterly astonishing to see the destruction the F5 tornado left on the south Kansas City neighborhood. By the time the storm cleared, it took 44 lives, injured 531 people and did more than $2.5 million worth of damage.

In a time where there were no tornado sirens, watches or warnings from the National Weather Service and extensive television coverage, many families in the storm’s path had less than a minute to hunker down. Plus, many Kansas City homes did not have basements.

Here’s a timeline from that fateful evening of the tornado, which at times ranged from 175 to 700 yards wide and was on the ground for 1 hour, 38 minutes.

As the tornado moved northeast through farmland north and east of Williamsburg, it brushed the town of Homewood, Kansas. Around Homewood, witnesses reported multiple funnels, the main one of which caused massive damage beginning at the Antioch Cemetery northeast of Homewood. Headstones from the cemetery were carried for miles. One eyewitness recalled seeing a greenish-gray cloud turning violently.

“Tentacles were reaching down out of the cloud and bouncing off the ground,” one eyewitness said. “Five and up to 10 tentacles came down and joined together.”

The tornado then skirted along the hill on the southern fringe of Ottawa, Kansas. The first two victims of the tornado were reported near Ottawa when the tornado slammed into the home of an elderly couple just sitting down to dinner.

6:52 P.M.
The storm continued to move northeast Spring Hill, where Rev. Robert Alexander captured the storm’s iconic image from the north porch of the Methodist church in town.

Olathe was next in the storm’s path, where the U.S. Weather Bureau reported, “We have just this moment received report of a tornado on the ground moving rapidly northeastward at this exact spot.”

The tornado crosses the state line and strikes the Martin City area, where it virtually destroys every home and building in the area, including the popular Jess and Jim’s Steakhouse.

“Braniff pilot reports tornado on the ground north of Grandview moving northeast – appears to be headed toward East edge of city,” the Weather Bureau reports.

Blocks and blocks of devastation are reported in the Hickman Mills and Ruskin Heights area. The Weather Bureau said, “Some places the ground was swept clean and cars on both sides of U.S. Highway 71 were tossed about like toys.”

The tornado finally lifts from the ground about two miles north of Knobtown.

The Weather Bureau is finally able to issue the “all-clear” update for the Kansas City metro area. 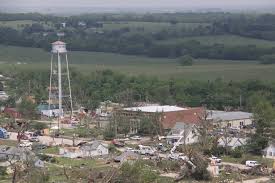 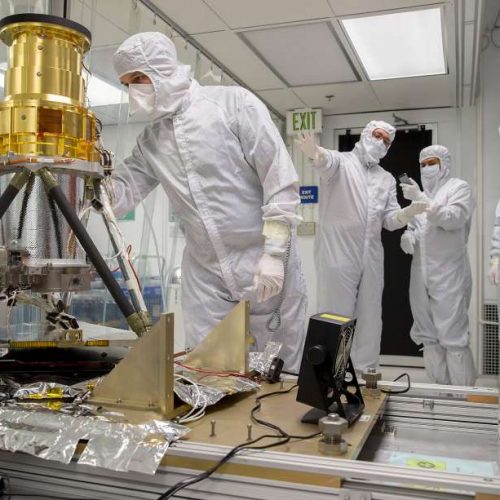 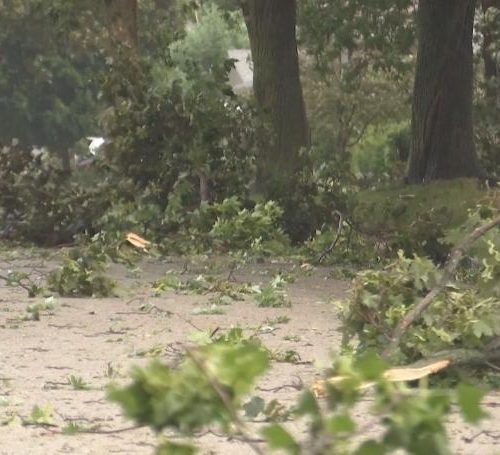 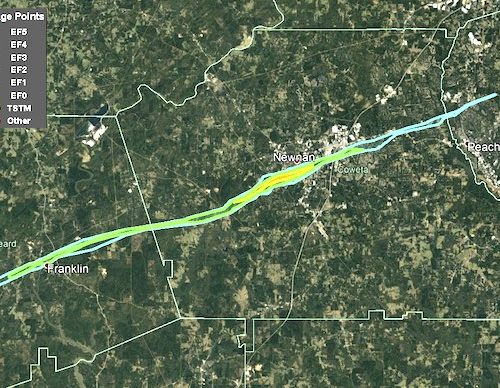 Track of terror: Along the path of the Newnan tornado