A two-day pounding of severe weather across portions of the southern U.S. and into the Midwest left 11 people dead, prompting two governors to declare states of emergency as tornadoes, heavy rainfall and high winds ravaged the region.

Two first responders in Lubbock, Texas, were among the fatalities, killed when they were hit by a vehicle at the scene of a traffic accident in icy conditions. In Oklahoma, a man drowned after being swept away from his stalled truck by floodwaters. And in Alabama, a tornado with winds up to 134 mph descended on Pickens County and killed three.

“I have reached out to both the county leadership as well as the legislative delegation to offer my deepest condolences in this terrible loss of life,” Alabama Gov. Kay Ivey said in a statement Sunday. “We will stand together while we grieve the loss of three of our fellow Alabamians and continue to pray for their loved ones.’’

Hundreds of thousands from Texas to Ohio were initially left without power by the weekend storms, which uprooted trees, knocked down power lines, forced highway closures and even lifted a trailer home in Louisiana off its foundation and carried it several hundred feet.

Arkansas Gov. Asa Hutchinson and Mississippi Gov. Phil Bryant each declared a state of emergency to mobilize extra resources after the harsh weather inflicted major damage on their respective states.

At least 12 tornado reports were submitted to the National Weather Service, and more were expected as crews survey the damage, according to AccuWeather.

In northwestern Louisiana, three deaths were blamed on high winds. A man in his bed in Oil City was crushed to death when a tree fell on his home early Saturday. A couple in nearby Bossier Parish were killed when the storms demolished their mobile home. Benton Middle School had parts of its roof torn off by the winds, forcing cancellation of classes Monday.

The National Weather Service said a tornado with 135 mph winds hit the area.

More than 1,200 flights were canceled at Chicago’s O’Hare and Midway airports as the storms brought slippery conditions, freezing rain and wind gusts up to 50 mph. The city’s lakefront was battered by waves as high as 18 feet.

High winds and icy weather were factors in power outages affecting tens of thousands of people in the South and the Northeast. The PowerOutage.US website, which tracks outages, reported more than 40,000 outages in New York. More than 28,000 were without power in the Carolinas on Sunday morning.

The National Weather Service said in a tweet that strong winds will impact travel in parts of the Mid-Atlantic and Northeast on Sunday. 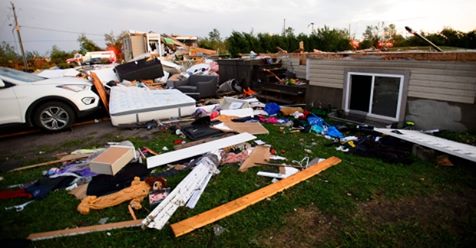 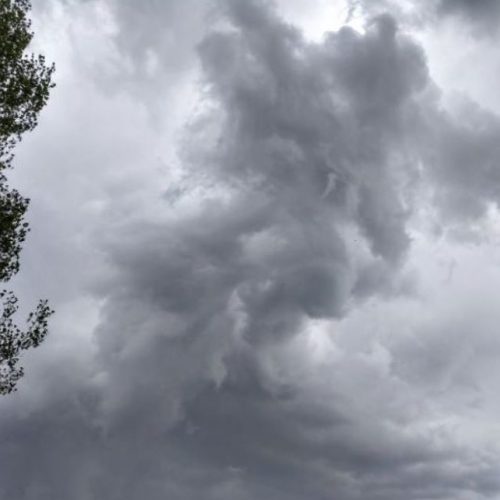 Tornado touches down near Blackfoot amid record U.S. tornado...