A tornado left a miles-long trail of heavy damage from northwest Dallas to Richardson late Sunday, and the National Weather Service was investigating reports that other funnel clouds had hit the area.

The city of Dallas said early Monday that there had been no reports of deaths or serious injuries. First responders had been going door to door in some neighborhoods to check on residents. Police and fire crews began assessing damaged structures through the night.

Parts of northern Dallas, including the Love Field area, were hit especially hard.

The National Weather Service will survey the damage Monday and confirm the storm’s strength, but some early estimates suggested wind speeds were well over 100 mph.

Survey teams also confirmed a tornado in North Dallas, with estimated winds of up to 140 mph, the equivalent of an EF-3 tornado.

Dallas, Richardson, Garland, Sachse and Rowlett were being surveyed, with teams already getting to work by 7:30 a.m. The extent of the damage could require a second day of investigation.

National Weather Service experts suspect that more than one tornado hit the area, with the first one forming north of Love Field about 9 p.m.

KXAS-TV (NBC5) meteorologist Rick Mitchell estimated the tornado’s route may have stretched 17 miles, though the path of its damage may not have been continuous.

Dallas Fire-Rescue responded to calls about people who had been injured by broken glass in their homes, spokesman Jason Evans said.

A line of strong storms containing winds up to 65 mph in some pockets was moving east into the Dallas-Fort Worth area as of about midnight Monday, according to the National Weather Service. A tornado warning for Collin County, including McKinney, Allen and Fairview, was in effect until 1 a.m.

DART warned commuters of delays before 7 a.m., including problems for light-rail passengers on the Orange and Red lines. Shuttle buses were operating between the Park Lane and Spring Valley stations because of ongoing problems. Street traffic was also slow in some areas, in part because of malfunctioning traffic lights, and backups were reported early Monday on Interstates 30 and 635.

On westbound State Highway 183 water that collected from the storms overnight forced the closure of several lanes, with water at least a foot deep reported in some places.

Gas leaks were reported north of Walnut Hill Lane, the city said in its news release. Residents who smelled natural gas or suspected a leak were asked to evacuate the area and call 911 and the Atmos emergency line at 866-322-8667.

Social media video showed a large funnel cloud over Dallas as the storm moved through the city, and photos showed numerous structural collapses and heavy damage to homes.

Dallas Fire-Rescue crews responded to a collapsed structure in northwest Dallas at Walnut Hill Lane and Harry Hines Boulevard. A building had tumbled down, power lines had fallen in the street and a car was on its side.

Initial reports indicated as many as seven people had safely made it out of the building. A search-and-rescue team checked the structure late Sunday to ensure no one was trapped inside.

At Walnut Hill Lane and Monroe Drive, buildings were flattened. At least 20 fire trucks were at the scene.

In the El Rancho supermarket parking lot on Marsh Lane near Walnut Hill Lane, car windows were blown out. The store appeared to be collapsed from the inside. An air conditioner that appeared to have been torn from a roof was among the rubble.

Leonardo Noriega, 46, was driving home along Marsh Lane after picking up some Chinese food when the roar of the tornado came rushing at him. He heard the sirens and pulled his pickup into the parking lot of the strip shopping center at Marsh just northwest of Walnut Hill.

Then everything went dark.

“When the sirens started I stopped right there,” he said. “It was so quick.”

He laid down on the floor of his truck just as every window popped into thousands of pieces.

Shaken, Noriega looked over at a truck still in the street, about 15 feet from his, and in even worse shape than his.

“That man was in bad shape,” he said. “They took him to the hospital.”

In the 9800 block of Brookbank Drive, police were going to homes in the area to check on residents. Light poles and power lines were down, and debris from trees and roofing was in the street.

At U.S. 75 and Royal Lane, tree limbs were on the highway and road signs had been flipped over.

Mary Ann Sigel, who lives off of Royal Lane, had no power and her lawn was scattered with tree limbs.

“It was weird. I heard hail for a few seconds and then a loud boom,” she said. “It only lasted for a few minutes and then it was over.”

The Home Depot at Forest Lane and Central Expressway appeared to have taken a direct hit. The roof had collapsed, and water rushed from pipes that had been ripped from the walls.

A Home Depot employee said store employees had been sent home early ahead of the storms and no one was inside when the storm hit.

The Episcopal School of Dallas canceled classes for Monday and urged people to stay away from the campus while crews clean up.

Dallas Fire-Rescue reported that its own station near Royal Lane and Preston Road sustained significant damage but that none of the firefighters inside were injured.

Mike and Jenny Kellner of Uvalde were on a Southwest plane that was scheduled to land in Dallas just as the tornado was spotted near Love Field.

They and another couple were among the hundreds of travelers who were redirected to the Lubbock Airport.

They first learned they weren’t making it to San Antonio at about 9:15 p.m. when the pilot alerted them.

They landed in Lubbock about 10 minutes later.

“Love Field is a mess,” the pilot told the Kellners and other passengers on the plane. 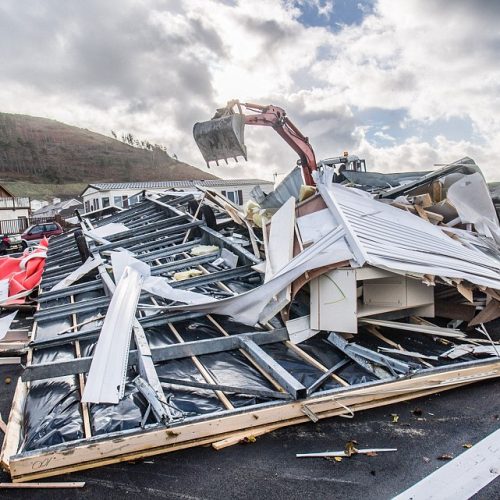 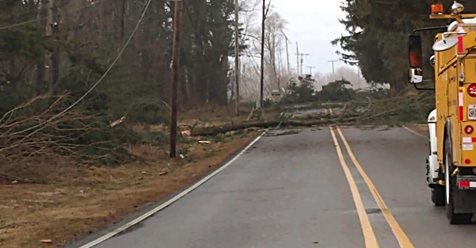