BAY COUNTY, Fla. (WJHG/WECP) – According to the National Weather Service, an EF1 tornado touched down at Tyndall Air Force base Saturday night, but officials say the damage was minor.

Major Joost Verduyn, the Chief of Public Affairs for Tyndall Air Force Base said, “All in all, this event pales in comparison to the hurricane, it’s a relatively minor event for us. It’s hard to say a tornado was a minor event, but in this case, it really is, because it’s not going to set us back at all.”

The tornado damaged a lodging building, broke windows out of cars, and toppled an awning, but because of Hurricane Michael, the base was already a step ahead on repairs.

Verduyn added, “When you have a tornado come through that hits buildings that are already damaged, it’s not a big ratchet up from where it was before.”

As for the future for any projects and missions on the base, Verduyn said, “This tornado absolutely didn’t delay any projects, we’re going to keep moving forward and still building the Tyndall of the future.”

While Tyndall recovers from both events, officials say every day gets a little bit better.

“The biggest thing for us is that here at Tyndall, whether it be a hurricane or a tornado, we’re going to continue to build a stronger Tyndall,” said Verduyn.

McGregor reflects on progress one year after tornado 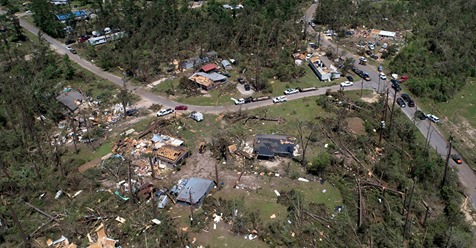 Tornado Destroys More Than 170 Homes in One Texas Town