Experts confirmed that the damage in seven towns on May 4 was caused by an EF1 tornado with maximum winds of 80-100 mph.

The tornado took down trees along a 36-mile path from Charlestown to Webster. Damage was also found in Langdon, Acworth, Lempster, Bradford and Warner.

The tornado was the second-earliest ever recorded in New Hampshire.

“Typically, we see tornadoes more in the late June through July and early August timeframe, so the fact that we had a tornado in early May is unusual,” said John Jensenius, of the National Weather Service.

“Within like a minute — not even, probably like 30 seconds — it was done and over with,” she said.

Spencer said she was at home with her boyfriend around 9:30 p.m. on May 4 when it happened.

“All of a sudden, the dogs started barking and I looked out the window and it was just rain and wind,” she said.

Spencer said that while they didn’t see the full scope of the damage until the next day, they certainly heard it.

“We heard all this crashing and snapping. Then, we were trying to find the flashlights just in case the power went off, and it just went right out. So sudden,” Spencer said.

Some trees snapped in half, and others were ripped right out of the ground. A large tree also fell within feet of two large propane tanks outside their home.

Despite a tree on top of a vehicle and lots of cleanup work left to do, Spencer and her boyfriend are counting their blessings.

“It was shocking. It’s still kind of crazy to think that all those trees are gone and not even a branch hit the house,” she said.

Some main roads were blocked by downed trees.

Many people from the impacted areas have reported that they’ve seen powerful storms before, but nothing like this one. 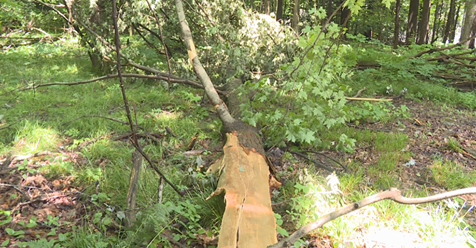 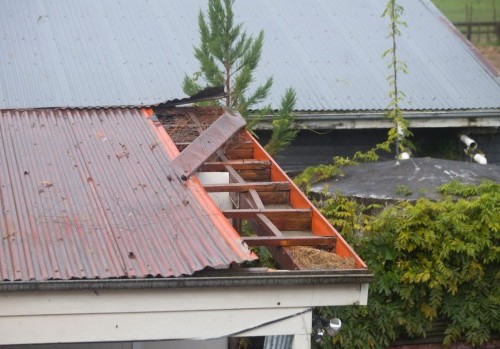 Tornado traps Kiwi cop in car: ‘We were just getting h...