The weather service said it received reports of downed trees, downed utility poles and overturned cars. NWS officials said winds were about 100-105 mph, and the tornado carved about a mile-long path about a football field wide.

“It’s a relatively narrow, quite short-lived tornado, and certainly, that would be substantiated by any of the radar data that we saw yesterday,” Bill Sandler, with the National Weather Service, said. “What’s unusual about this event is it acted more like the type of tornado that we would experience with a tropical system, even though we weren’t being affected by a tropical system.”

The heaviest damage was reported near Salisbury University. Police started getting calls about damage shortly after 1:30 p.m., initially on the south side of the city near the university, and then the storm moved northeast.

While a tornado warning was not issued, a severe thunderstorm warning was. The weather service said most of the rotation in the storm was located in the lower altitudes, and there was not much information that there was a tornado until it hit.

Emergency management officials said most residents didn’t know how serious the situation was until it was happening.

“The 911 call takers that were screening those calls, their intuition, their instincts told them this could possibly be a tornado. They actually set off our tornado sirens at the fire stations in the central area of Salisbury,” said Dave Shipley, director of the Wicomico County Department of Emergency Services.

There were no serious injuries reported.

“Obviously, we have a couple families that are experiencing the worst of it and had to move, and obviously, that’s difficult for them, but really, as a city, I think there’s a bit of a sense of relief,” Salisbury Mayor Jacob Day said.

Trees came down on homes and a porch collapsed in a neighborhood just northeast of the university. Residents said they expect to be cleaning up for quite some time.

Even as crews started removing a tree from atop of George Conway’s home, he still can’t believe what happened.

“We went to the front window and we looked up and the tree said timber. I was like, ‘Oh my God.’ The house was shaking and everything. It was crazy,” Conway said.

Photos from the area showed cars overturned and buildings damaged. City crews spent much of Monday removing downed trees and overturned cars and getting power restored to homeowners.

“To see what actually transpired and how raw everybody’s emotions were after this thing passed, it was incredible,” Benn said. “Seeing a car on its top and another one flipped over, it was scary. It seemed like something out of a movie, and even watching the video, it looks like a movie set, the way how easily these things the cars are flipped over and everything.”

A neighborhood east of U.S. Route 13 got the worst of it with downed power lines that knocked out power for at least five hours. But neighbors were spending that time outside cleaning up.

“I’ve never seen anything like this before,” Conway said. 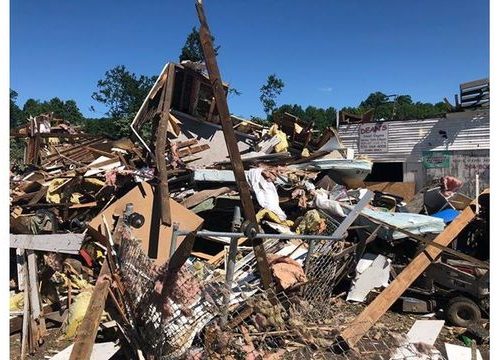 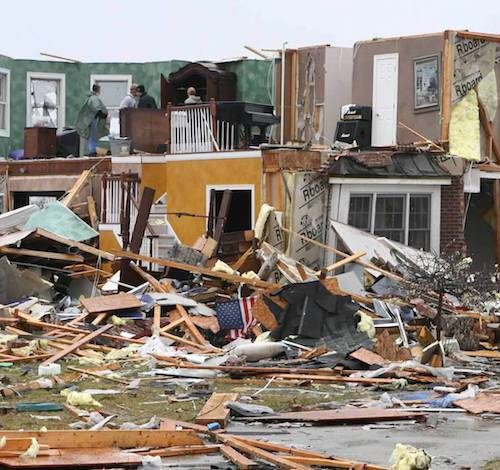 Tornado roared through Wheatland 10 years ago