Meteorologist Charles Belton of the National Weather Service said Sunday that there were two confirmed tornado tracks Friday night, rated at EF1 and EF2, at Lonsdale and the surrounding area.

The EF1, which occurred between 10:30 p.m. and 10:35 p.m. Friday, caused heavy damage to the intersection of Pleasant Run and 10 Mile roads, located in Saline County just east of the Garland County line. On Sunday morning, the intersection was surrounded by splintered remains of trees, fallen timber and damaged structures.

Shon Smith, whose house at 3725 10 Mile Road partially collapsed due to a tree that fell into it during one tornado, said that he was aware of three residences, including his own, that were hit Friday night. He said that one of the other two that were hit is in his neighborhood.

Smith described his neighborhood as “busy” since the tornado hit.

“Chain saws going, equipment going, lot of traffic through here,” Smith said, describing the scene of his neighborhood. “I know that a lot of people that come through here are curious.”

Smith was watching TV in the living room of his house Friday night when his wife, Sandy, came into the living room and told him that she was hearing a “freight train noise.”

Smith described the moment that the tornado hit as one that heightened his senses. He said that the freight train sound that his wife had described to him became very loud.

“You feel and hear everything — roof’s falling in, siding and insulation is falling, rain, glass,” Smith said.

Smith said that the chaos gave way to utter silence. He said that he was hesitant to act after the tornado had passed through.

“You’re still in shock, because you’re like, ‘Is it over?’ Then you realize it is, and you start to get your bearings and what you need to do next,” Smith said.

The Smiths, who were trapped in their house, attempted to contact Sandy Smith’s uncle, Matt Conrad, who lives about a quarter of a mile to the east.

“After a couple of missed phone calls, my wife calls and finds out they’re trapped,” Conrad said. “I get in my truck and grab a chain saw.”

Conrad drove west on Pleasant Run Road to the intersection to try to reach the Smiths, but he was blocked by trees that had been knocked into Cash Mountain Road to 10 Mile Road by the tornado.

“I thought, ‘Man, this is worse than I expected,'” Conrad said. “Our house wasn’t too bad. It threw a trampoline across the way and took my grill and threw it out in the yard, but really no damage like this.”

Conrad began cutting away at the felled trees, trying to get to the Smiths. He said that by the time he reached 10 Mile Road at 3 a.m., he was sent back by Lonsdale Volunteer Fire Department, which said that they had the situation under control.

Conrad said that the Smiths are currently living with them until their living situation becomes more settled.

Since Friday, repair and cleanup efforts have been initiated at the site of the tornado. Dannie Darby, a laborer at MDR Construction, said that the intersection was lacking power until 9:30 p.m. Saturday. He said that MDR had to replace about half a mile of electrical line running east from the intersection on Pleasant Run Road and fix several broken poles.

Folsom Tree Service was removing the fallen tree from the Smiths’ house Sunday morning. Jeremy Folsom, owner of Folsom Tree Service, believes that it will take about 10 to 15 years until the intersection will look as if a tornado never came through.

Smith said that while he has lived through other Arkansas tornadoes, including the March 1997 tornado outbreak, this tornado was more devastating on a personal level.

“That one did more destruction generally, whereas (this) one, I was home,” Smith said. “You’re in it. You’re living it during the destruction.”

Smith said that going forward, his neighborhood doesn’t have much of a choice but to move forward and recover from the disaster. He expressed optimism with what he has seen so far.

“A lot of people open up and share and help out. The fire department and volunteers are awesome,” Smith said. “In times of need, people are giving and caring enough to help.” 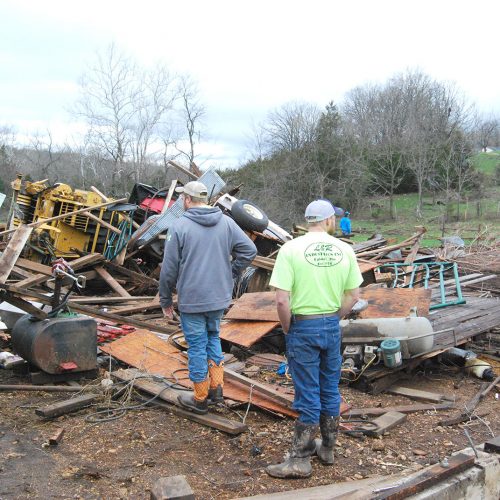 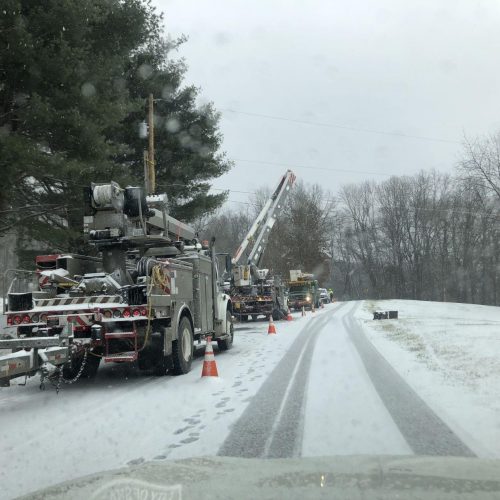 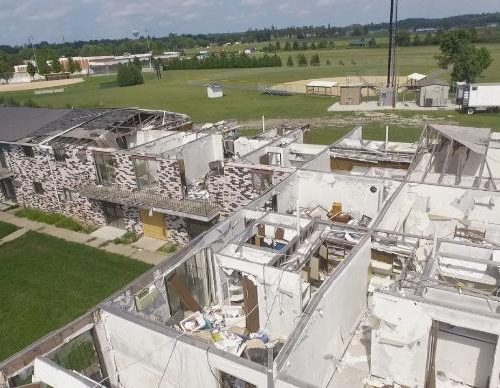