HERMOSA | The tornado that tore through a pastoral hamlet 8 miles northeast of Hermosa on Monday afternoon caused no human injuries or deaths. But multiple residences sustained severe damage.

Homeowner Chris Lowe didn’t take the National Weather Service’s tornado warning too seriously when he first saw it around 4:30 p.m. “We don’t get tornadoes out here,” he said.

It wasn’t until the winds lifted the trampoline in the back yard and crashed it into the westward facing porch that Lowe yelled for his wife and kids to get into the basement. While the storm raged, Lowe’s ears began popping from the pressure building in the house. He later found a cracked interior window pane, but the exterior pane on the other side was not damaged.

The winds, between 120 mph and 125 mph, swirled into a tornado 200 yards across. According to National Weather Service meteorologist Aaron Ward, the twister touched down at 4:22 p.m. in a wooded area along Murphy Road, three miles northwest of Hermosa. It left snapped pine trees in its path as it cut northeast along Highway 79, severing power lines as it drew closer to the Spring Creek Acres subdivision, where Lowe and his family live.

When they emerged the next day, a desolate and puzzling landscape greeted Lowe. A bowling ball-size hole was punched clean through his garage. Patches of roofing had been ripped away. Yet, petals of the potted flowers by the porch were undisturbed.

Though the trampoline had been tossed, a fragile glass lawn ornament nearby remained intact. His workshop was utterly destroyed, the thick structural beams jaggedly shorn. He found a refrigerator flung more than a football field’s distance away. A small flatbed trailer parked beside the shop ended up in a ditch only a few dozen feet away, with its cargo—a relatively light and unsecured plastic row boat—still in place.

There were no tracks. It was as if the tornado had picked up the trailer and set it down gently near the roadside.

The Lowes have lived in the area for a year and just recently finished building their home in the 2400 block of Dewey Lane. The owner of KRS Construction of Hermosa, Lowe is confident he can rebuild, though it will take the family some time to adjust to their strange new reality.

“You don’t know where to start,” said Lowe’s wife, Becky. “Everything is a mess. Where do you begin?”

Lowes’ refrigerator landed near Patty Tracey’s horse corral across the street. Her home doesn’t have a basement, so Tracey, 60, weathered the storm mostly in her living room, listening in the darkness as boards snapped and windows burst inward.

“It all happened so fast, I didn’t have time to be afraid,” she said.

According to Ward, from when it landed to when it dissipated, the tornado lasted 12 minutes, weaving a path of destruction 7.4 miles long.

Like at the Lowes’, the storm peeled off layers of roofing and blew apart a few smaller structures nearby. The exterior of Tracey’s home was covered in thin cottony layers of insulation, shredded and sprayed out by the punishing winds. The nearby workshop that her sons use to house their fencing business was reduced to a pile of scattered matchsticks. An adjacent bird coop was stomped into a wreck of broken wood and gnarled wire.

Tracey said she has lived in the area for five years, and never seen storm damage like this. While she waited for a call from the insurance man on Tuesday morning, a neighbor boy named Jed Sieverding, 12, set himself to work on the bird coop, clipping away with a set of wire cutters to extricate a few peacocks that had miraculously survived the deluge.

Sieverding said he had been home alone when the tornado hit, his parents and siblings away at work. He ran outside to get their dogs from the kennel before retreating with them into the basement.

“You couldn’t really see it,” Sieverding said of the tornado. “It was like walls of water.”

What he could see, Sieverding said, was debris whirling in circles, rising into the air.

Debris like the crumpled aluminum roofing, left scattered like discarded candy wrappers along the roadsides and snarled around wooden fence posts at the entrance to the Menken residence a short drive away from Tracey’s home.

After watching the wind sweep the patio furniture off the deck and suck the grill into the sky, Chris Menken looked out the front window in time to see metal roofing from a nearby shed flying straight at him. When it hit the side of the house, Menken said it made the “one of the loudest booms I’ve heard in a long time.”

When the winds subsided, Menken emerged to find that his garage was completely gone, with only the concrete foundation left. His brand new Hideout fifth-wheel camper was flipped on its back. The wind had lifted and rotated the 37-foot-long, 10,000-pound trailer, then slammed it back down on the ground about 30 feet away from where Menken had parked it. The camper then skidded into Menken’s new boat and a Blue Buick LeSabre. Then the winds smashed all three into his workshop.

Though the damage is overwhelming, the community response has been very positive, Menken, Tracey, and Lowe agree. Neighbors have been stopping by since the storm ended, some with pizzas and supplies, others offering to help with cleanup efforts.

Standing in the wreckage, Menken said, “Nobody was hurt. It’s just stuff. It can all be replaced.” 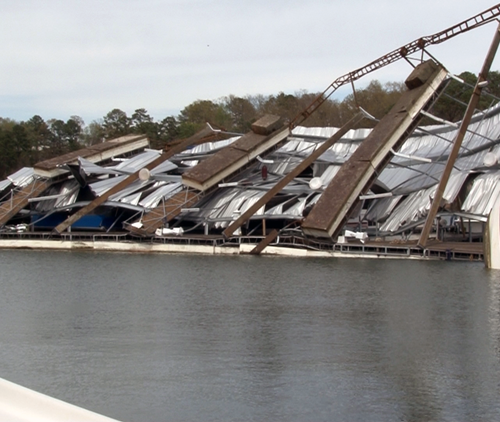 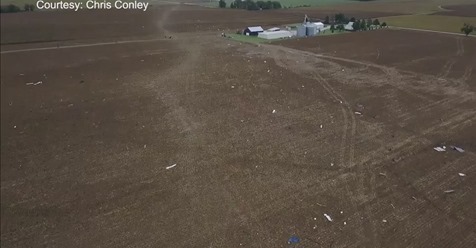 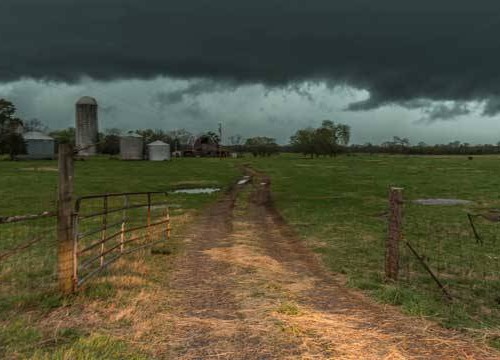