GREENVILLE COUNTY, SC (FOX Carolina) Monday morning, residents in Greenville County will continue to clean up following a severe storm Saturday night that spawned a tornado. In addition to that, high winds toppled trees and left miles of damage across the Upstate as the storm passed through.

Sunday morning, the National Weather Service at GSP said a supercell storm moved through the area of Greenville County near Pleasantburg Drive and Rutherford Road around 9:15 p.m.

Around 9:30 a.m., NWS said a meteorologist and team were out in the Taylors area, surveying damage from what they later classified as an EF-2 tornado. According to the NWS, the tornado began three miles north of Greenville and ended three miles south and southeast of Taylors, with a path longer than five miles. The agency says no injuries or deaths are confirmed, but the tornado did leave plenty of damage in its wake.

Some of the damage included uprooting tree trunks, lifting the roof off of a hotel and restaurant near Rutherford Road, damaging cars, and damaging a church’s roof.

The NWS says it reached a peak wind intensity of 115 mph.

Shepherd’s Care Assisted Living facility along Rutherford and Pleastanburg Road didn’t appear to have any structural damage, but trees on the property were snapped in half and debris was visible inside the gate.

A large mangled collection of signs and metal pieces of debris were visible outside Summit Church on Rutherford Road. A power pole was also down nearby.

Multiple large trees were down around Wade Hampton High School. A tree and downed power lines shut down Balfer Road between the high school and Sav-Mor store.

Some of the school’s athletic complex was affected by the storm, with debris scattered along the track, shingles ripped off some roofs, and light equipment damage.

“That’s a 30 inch log laying under my bed and I would have been under it.,” said resident Robert Titus. He told us had he gone to bed, he would have been hurt or possibly killed. He turns 61 on Monday, but there isn’t time to celebrate.

“No birthday dinner tonight. Nothing like that. We’re going to work ’til dark — we’ll get it all cleaned up,” he said.

Despite this, however, he says he has his reasons to be grateful.

“Well, you know, the Lord takes care of us. Someone was watching over us last night.”​ 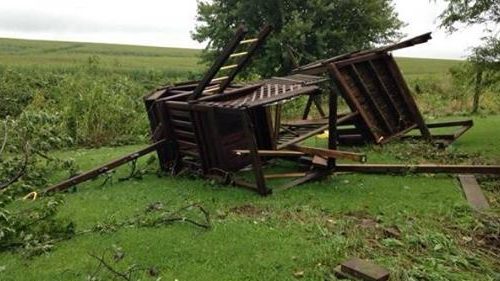 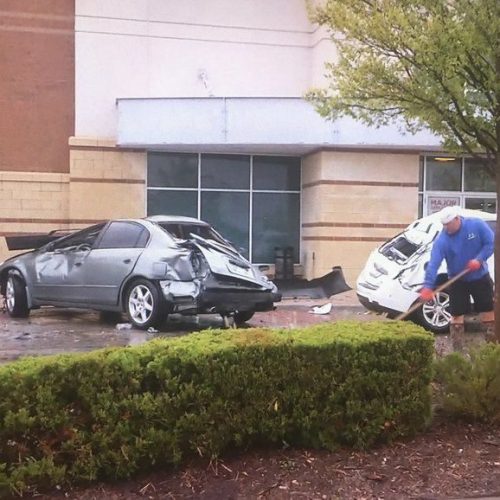