The strongest, an EF-2 with maximum sustained winds of 130 mph, formed just before 11 a.m. at Battleground Road and Interstate 85 in Grover. That’s south of Kings Mountain in Cleveland County.

The tornado began just west of I-85 near near Lane Street, “snapping and uprooting trees as it crossed the interstate and moved east along Lane Street.” The tornado traveled 6.41 miles, next along Old Salisbury-Concord Road to Gold Fish Road, where several homes were damaged.

TORNADO IN SOUTH MECK
A tornado with maximum sustained winds of 95 mph touched down west of Pineville in southern Mecklenburg County, and a weaker one hit the community of Gold Hill in Rowan County, NWS meteorologists said.

After touching down at 12:18 p.m., “almost exactly on the NC/SC line along Nations Ford Road,” an EF-1 tornado traveled nearly 17 miles on “an intermittent path,” officials said. From south Charlotte, it continued east into Matthews and Union County, NWS meteorologist Trisha Palmer said.

EF-1 is the second weakest of six types of tornadoes on the Enhanced Fujita Scale, which ranks tornadoes by wind speed and damage.

Most of the damage observed Friday was from uprooted trees and branches, including some that fell on houses. Palmer also said there was some structural damage to warehouse roofs in Pineville.

Employees at The Building Center lumber headquarters in Pineville took cover Thursday as the tornado struck its location near the South Carolina border, the Observer learned Friday.

Jill Jessee told the Observer by phone Friday she was working at her desk Thursday when an emergency weather alert sounded on her cell phone. She then spoke with the company’s HR department and an email notification was quickly sent to the more than 100 people working on site.

The quick action kept people safe as employees took cover away from windows and the tornado wreaked havoc on parts of the business’ exterior and roof.

“As soon as we stepped out in the hall … Boom! It hit,” Jessee said.

The building was evacuated for a period of time Thursday so officials could assess safety and damages.

Due to the business having plenty of supplies and skilled personnel, repairs to the building commenced almost immediately after the site was deemed safe, Jessee said. The roof may still need some work. But by Friday morning, normal operations had resumed to handle both shipping and receiving.

“Everybody’s safe and that’s the number one thing,” she said.

TORNADO CROSSED I-485 — TWICE
The twister uprooted trees along its path until reaching an industrial area west of Interstate 485, where roofs on several large buildings were damaged and the wall of a building under construction collapsed, according to the NWS.

“The tornado maintained strength as it crossed I-485 and traveled across largely residential areas of southern Mecklenburg County,” according to the NWS team assessment report.

At least one tree fell on a house, according to the NWS. More damage to large trees was visible along Highway 51 in Matthews, east of Elizabeth Lane Elementary School.

That’s where the tornado weakened, but still damaged trees on West John Street and elsewhere after crossing Independence Boulevard and again, I-485, before entering Union County. The tornado fizzled near Hawthorne Drive in Indian Trail, after lasting 16 minutes, team said.

Just before noon Thursday, an EF-0 tornado with maximum winds of 85 mph developed near the intersection of Old Beatty and St. Stephens Church roads, a mile south of Gold Hill, according to the NWS damage team. EF-0 is the weakest on the Enhanced Fujita Scale.

The twister snapped and uprooted trees as it moved east along Old Beatty Road, the team found during a survey Friday. The tornado traveled about 1 1/2 miles before ending near the Old Beatty Road-Old U.S. 80 intersection.

SURVEYING DAMAGE
The National Weather Service also confirmed an EF-1 in Spartanburg, with a 10 mile track with maximum wind speed of 110 miles per hour.

Palmer called the timing and severity of the severe weather “pretty unusual” for the area. The typical severe weather season is March to May, so this storm was “a little bit early.”

Tim Porter, Charlotte’s city arborist, said he expected all major roads to be cleared by Friday evening, but said it would take between two and four weeks for crews collect all of the debris.

“It’s going to take some time, we ask people to be patient,” he said, noting the volume of debris was about half of what was seen after Hurricanes Florence and Michael.

by Joe Marusak and Lauren Lindstrom (2020, Feb 7) The Charlotte Observer 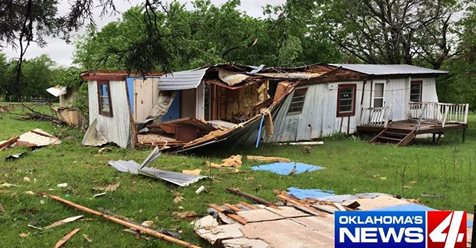