Despite being known as the Windy City, Chicago has developed a false reputation as being impervious to tornadoes.

In its history, Chicago has seen very few tornadoes compared with the rest of Illinois, which, as a whole, sees dozens of tornadoes annually and has endured the nation’s deadliest tornado, the 1925 Tri-State tornado that left 695 dead and 2,000 injured on a path from northeastern Missouri through southern Illinois and Indiana.

Experts say many Chicago residents have been lulled into a false sense of security because there hasn’t been a severe tornado near the city in decades. Many simply believe the city is tornado-proof, espousing junk science that Chicago is protected by the cooler temperatures and breezes from Lake Michigan, or that downtown’s skyline is a stumbling block for cyclones.

Scientists like Northern Illinois University assistant professor Victor Gensini have been fighting against those misnomers for years.

“People in Chicago are complacent because there’s an urban legend that the lake will steer a tornado away or that the buildings are going to protect you.”

More tornadoes are touching down east of the Mississippi River. If the Midwest is the dartboard, ‘the bull’s-eye is Chicago.’ »
In the spring, as Lake Michigan thaws from its winter freeze, the areas near the lake stay cooler. And the cooler ground-level temperatures make for less than ideal conditions, given tornadoes require a clash of warm and cold air.

While it is commonplace for storms to stall south of Interstate 80, the lake effect buffer is negligible when severe storm fronts capable of producing significant tornadoes occur.

“On those type of days, where there’s a weak lake breeze, that will have a minimal effect, because the environment is so volatile,” said Matt Friedlein, a meteorologist at the National Weather Service in Romeoville. “It can produce long-lived storms and tornado potential. Some of the tornadoes (that have occurred in Illinois) go 25-plus miles.”

Friedlein continued, “Once it goes out into the lake, then it’s a different story, because you’re going directly over cold air.”

Any protection provided by the city’s skyline is also overblown. Although large structures could add friction along a puny storm’s path, it won’t do much to stop a supercell-producing tornado. 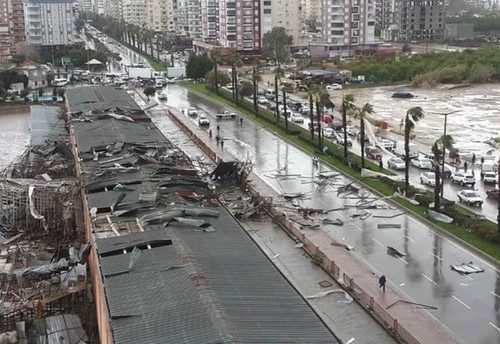