There was a tornado warning for Dallas County that expired just before 4 p.m.

A funnel cloud was reported near Lake Worth as the severe storm moved through Tarrant County.

There have been reports of damage throughout North Texas due to the storms.

In Saginaw, a building that appeared to be under construction collapsed in the Comanche Spring subdivision.

Storm damage was seen to homes in north Fort Worth, especially in the Crawford Farms subdivision near Riverside Drive and Heritage Trace Parkway.

MedStar reported that two people in the area were taken to the hospital due to injuries from a fallen tree. Their conditions are unknown.

Two of the homes in the Crawford Farms subdivision were marked as unlivable, according to the Fort Worth Fire Department.

In Arlington, fallen trees and debris spread across neighborhood streets could be seen.

The Villa Creek apartment complex in Farmers Branch saw some significant damage to roofs. The tornado-warned storm moved through this area of Dallas County during the round of weather.

According to Oncor, about 37,000 customers are without power in Tarrant County. Dallas County has about 10,000 without power. 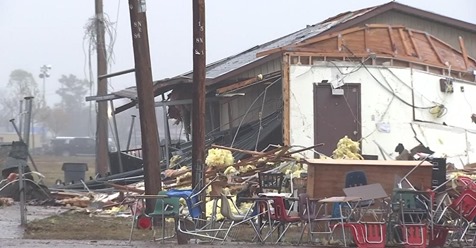