Cleanup continued Thursday after a powerful line of storms ravaged the Fox Cities Wednesday and produced at least eight tornadoes, including a twister on Appleton’s east side.

The EF1 tornado, packing winds of up to 95 mph, traveled six miles across far northeast Winnebago County and into the southeast side of Appleton and Kimberly and Little Chute, according to the National Weather Service.

Other tornadoes were reported near Nichols, Mackville and in Shawano and Brown counties.

Appleton’s east side and Kimberly saw the brunt of the damage. Large trees were uprooted, fallen tree branches littered yards and a number of homes and businesses were damaged.

A man was struck by debris in Kimberly during Wednesday’s storms, according to Fox Valley Metro police. He was taken to a hospital, and his injuries were not immediately known.

Reid Golf Course in Appleton closed Thursday as crews began cleaning up more than 20 downed trees that were scattered across the course. The course’s front nine holes reopened later in the afternoon.

Course superintendent Jeff Plasschaert estimated a $2,000 or $3,000 loss in revenue from the closure.

“It’s kind of like it came through in a straight line, cut right across,” said clubhouse attendant Bob Weiss.

Schaefer Park, located about a block south of College Avenue on Appleton’s east side, was hit hard, with dozens of downed trees scattered about.

Bob Paxton, who lives near the north edge of the park, said the storm rolled through with force Wednesday afternoon.

“I was home and I was sitting on the porch,” he said. “It was really nice and I was reading out there. All of a sudden it just turned black. You could tell by the park it was really dark. … It started blowing real fast. A trash can was rolling (down the street). It was fun to look at but scary. Because they told us — we’re looking at the TV and it says take cover, take cover. No, we looked out the window. …

“It happened so fast and then all of a sudden the power went out. … We were on the porch — again, not supposed to be — and we’re watching and the wind you could tell was going sideways from the west to the east. We were just sitting there watching it.

“It’s a shame, those fir trees. We love our park.”

“At this point, we’re not close to any emergency threshold,” Nelson said.

We Energies said it has restored power to about 20,000 Fox Valley customers since Wednesday afternoon. More than 3,000 remained without power by late Thursday afternoon.

“Some of those customers might not have their power back until Friday,” said We Energies spokesperson Cathy Schulze.

Wednesday’s storm damaged the roof, gas line and an air conditioning unit at one ThedaCare building — ThedaCare at Home at 3000 E. College Ave. in Appleton — and took out power at several others.

No patients or employees were injured at any of its sites. On Thursday morning, power had been restored to most of the buildings, and damage was being repaired at the College Avenue building. That facility housed offices of employees who meet with patients at their homes. A connected retail store is expected to reopen Friday.

“We were able to relocate almost 50 people so we would provide services for our patients and families by 8:30 this morning,” said Laura Reed, chief nurse executive and COO of ThedaCare, on Thursday morning. “We will have a much better idea of the cost of the damage by the end of the day.”

Power remained out Thursday at ThedaCare Physicians-Wild Rose, but Reed said they were hopeful that it would be working later Thursday. Patients were directed to the Wautoma Clinic.

Power was restored and operations resumed Thursday at the ThedaCare Medical Center-Waupaca, ThedaCare Physicians-Waupaca and ThedaCare Medial Center-Wild Rose. The facilities operated on generators during the power outage.

Juliana Van Boxtel was among a group of teenage lifeguards at Little Chute’s Doyle Park put to work Thursday picking up branches and debris strewn about the area.

“We had a lot of chairs in the pool,” she said. “The chairs cracked and there were pieces in the pool. … We dove down to the deep, so like 14 feet. There were chairs all over.”

Tanya Kehl came back to her house on Appleton’s Buchanan Street Wednesday evening to find a portion of a tree on her roof and part of another tree laying across her deck.

“My daughter was here freaking out,” Kehl said. “I was actually at work and I think I had about 15 people call me (about the damage to the house). Apparently my daughter called me like 15 times and was freaking out and grabbed the dogs and went in the basement. … She’s 16. … It’s not good.

“Thank God for insurance, that’s all I have to say.” 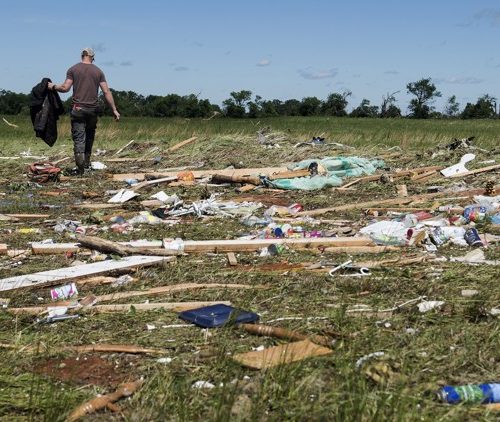 Tornado season winding down with numbers near average 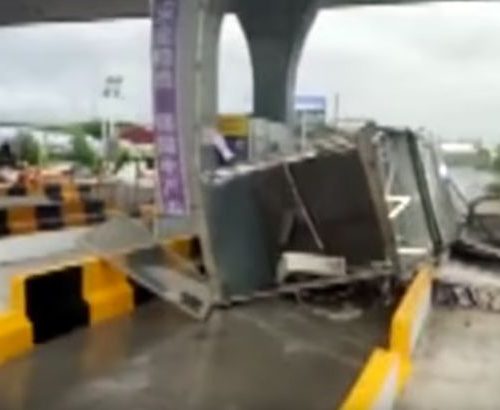 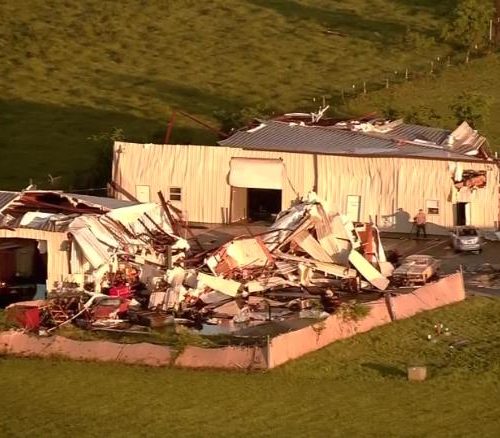 A tornado ripped through a Louisiana college town in severe ...