MERIDIAN, Miss. (WTOK)- The town of Enterprise took a hard hit on Wednesday’s EF-2 tornado. Residents are cleaning up debris around their homes, but one newly married couple is picking up what’s left of their home.

“The good Lord had his hand above us. He watched over us and protected us through the whole thing,” says Nathan Smith.

The Smith family had been remodeling their home for 6 months. Wednesday they were making their final touches on the home. On that same night just in 2 hours, they became homeless.

“We have physically lived in the house for two hours. Not two days or two weeks, but two hours. Since the day we got married we had plans to put us a house together. Me and her work on it. We were going to tell our kids one day that I and your mother built our first house together,” says tornado survivor Nathan.

Nathan and Lauren Smith were sleeping in bed when Lauren was awakened by the whistling wind coming outside. Within seconds the mobile home was flipped on its side.

“As the wind got stronger, the trailer then flipped again onto the roof where we ended on our backs. The floor was completely sucked off from the bottom of the trailer. We were laying under what would have been an exterior wall,” says Nathan.

The Smiths were terrified as they were thrown to the ceiling lying on their backs. Their challenge wouldn’t end there as the walls started falling on the couple.

“His head was on my stomach and the rest of his body was facing another wall. He was holding up one of the walls that he saw falling as we fell. He caught it with his legs so it wouldn’t crush us,” says Lauren Smith.

Pieces of the couple’s lives, memories, scattered by the destructive force of the tornado.

The couple says they are still alive because of their faith in God.
“Everybody that came out told us they don’t know how we’re still alive. We should them where we crawled out from. It’s by the grace of God that we’re still standing here with only a few minor scrapes and bruises,” says Lauren.

The Smiths say they are grateful to be alive and to have the clothes on their backs.

If you would like to help this couple, you can go to their go fund me account. “Nathan and Lauren Smith Disaster Relief Fund.” 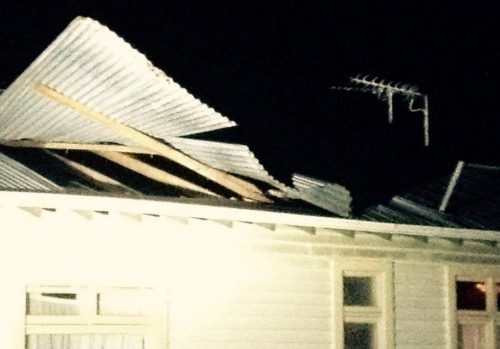 Tornado with winds of 100 mph touched down in Finger Lakes: ...

At least 3 tornadoes may have touched down in southeast Minn...