VALPARAISO —The “most intense” tornado to hit Porter County followed a path along Ind. 8 from Hebron to Kouts on May 26, 1917.

The 1917 tornado, which killed five people in Porter County and today would be rated a severe EF-4 storm, was one of 63 tornadoes in one of the worst tornado outbreaks in U.S. history.

To commemorate the 100th anniversary of the Hebron-Kouts tornado, members of the Valparaiso University Department of Meteorology gave visitors at the Porter County Museum a free lesson in meteorology Saturday.

Bart Wolf, a VU professor of meteorology, talked about how thunderstorms and tornadoes form, what happened during the 1917 tornado and how to protect against loss of life and property.

“May has more tornadoes than any other month of the year,” he said.

In early 1917, the U.S. had just entered World War I, he said. The average home price was $5,000 and the hourly wage was 22 cents. Television hadn’t been invented, only 8 percent of homes had telephones and even owning a radio receiver was prohibited in wartime.

“They didn’t want to panic people,” Wolf said. “Radar and air balloons had not been invented yet, and there were no warning sirens. Even if you had warnings, you couldn’t listen to them.”

The Hebron-Kouts tornado was part of one of the worst tornado outbreaks across the U.S. in which 383 people were killed by 63 tornadoes that would all be rated at least EF-2 today.

Wolf said that although there is not a lot of data about the Hebron-Kouts tornado, researchers have learned that hail measuring 2 inches to 3 inches was common during the storm and damage exceeded $500,000, which would be nearly $9.5 million in today’s dollars.

“The tornado traveled 100 miles over two hours and 46 minutes until it dissipated in Kouts,” he said.

Local response by volunteers, including the American Red Cross and the Boy Scouts was “swift,” said Wolf, and many of the injured were treated at the Christian Hospital in Valparaiso.

Although tornadoes were not rated on the EF scale until 1971, researchers consider the Hebron-Kouts storm to be the “most historically significant tornado to ever hit Porter County.”

Wolf stressed having a plan during tornado season, and knowing the difference between a tornado watch, when conditions are right for a tornado, and a tornado warning, which indicate a tornado has been spotted on radar or seen by an individual.

He said if a warning is issued, homeowners should go to the center of their basements under the stairs.

Wolf advised against opening the windows, which “will take your roof off,” and refraining from hanging on in a corner of the basement.

“Damage tends to collect in corners,” he said.

Mobile home residents should immediately vacate their home and go to a storm shelter.

“You only need an EF-1 to wipe out a mobile home.” 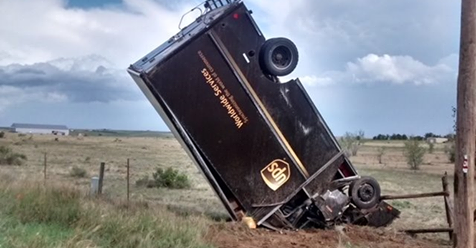 UPS truck lands on its hood after Byers tornado 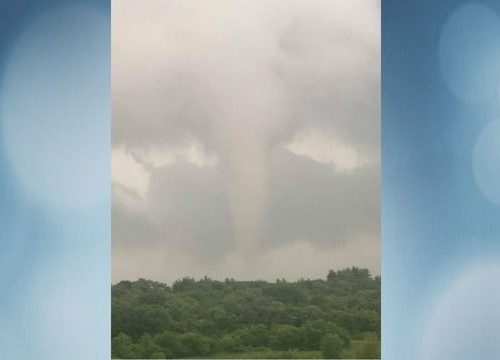